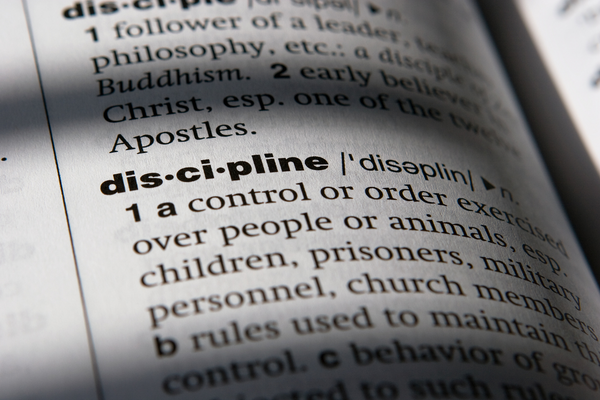 Lack Financial Discipline? Take a closer look at your problems and standards

When you think of a habitual shopper, like someone who really enjoys shopping, what phrases, or ways of describing that person, come to mind? Shopaholic? Shopping is his/her hobby or pastime? Money burns a hole in his/her pocket? How about this one: he/she spends money like he/she is mad at it? (That’s my personal favorite.)

What about someone who exhibits the same habitual behavior with exercise? Might we call that person an athlete? Bodybuilder? Gym rat? Meathead? Freak? What about this one: disciplined?

Would we ever describe the shopper as disciplined? Unless it was designed to mock, I think the obvious answer to that question is no. But why? Why do we say the athlete is disciplined, but not the shopper? If they both reflect the same consistency in the devotion of their respective time, then what gives?

Before we try to answer that question, let’s make sure we’re on the same page, here. Allow me to offer some definitions for discipline:

Sounds fun, right? So, back to the shopper and the athlete…

Well, how much control would we say a shopaholic is exhibiting? How about the athlete? How punishing is shopping? How about exercise? Does shopping correct, mold, or perfect any aspect of a person? Does exercise?

How about this question: between shopping and exercise, which one is designed to fix or prevent a problem? What do problems have to do with discipline?

Well, the fourth definition above clearly states that discipline is “[t]raining that corrects…” If you don’t have a problem, then what could there possibly be that needs correcting? That question obviously doesn’t account for those who like to fix things that ain’t broke, but I digress.

In case it hasn’t jumped out at you, what is being revealed is that when someone shows discipline, it means that their behavior is motivated by a problem. That’s all good and well, but what’s a problem? Offering an example of a problem is probably pretty easy for anyone, but what about defining what a problem is? Why might it matter whether we can define problem?

The reason why this matters is because if a problem is what leads to discipline, then we if lament the fact that we aren’t displaying enough discipline, ourselves, the cause of our lament might be found in the simple fact that we lack sufficient reason to show discipline—i.e., we are lacking a problem to provide motivation. Further, if we haven’t identified a problem, then it might mean that we don’t really know what a problem is, and so problems might not be as obvious for us to acknowledge or identify.

Let's look at deficits and standards

A note that we will revisit momentarily: if a problem is defined as a deficit, then the opposite of a problem would be enough, or even more than enough—a surplus, or excess.

The interesting thing about deficits is that they can’t be defined without measuring against a standard. So, to arrive at a deficit, you must compare current conditions to how they could or should be. You cannot arrive at a deficit by simply comparing current conditions to the way things used to be, unless you, or some condition(s), have regressed. What this means is that another definition for deficit is where improvement is needed.

If a deficit defines a problem, and the opposite of a deficit is defined by at least having enough of a certain condition, then this means that motivation comes from identifying a deficit—i.e., something in need of improvement. This means that we need to identify a way in which we don’t, or some current condition doesn’t, measure up to how it could or should be. It also means that we need to look forward, not backward, in looking for motivation, and forward, in this context, is synonymous with ways to improve.

In case the concept of looking forward needs a little more clarification, when we go on vacation, it is not merely the thought of leaving our home that provides the allure. Further, it is not the decreasing view of our home in the rearview mirror that builds excitement. It is the appeal of another location that motivates us, and it is the decreasing distance between us and our destination, our objective, as evidenced by what we see through the windshield, that builds our excitement. Stated more succinctly: it’s about what’s to come (what we see in the windshield), not what we leave behind (what we see in the rearview).

Financial matters are no different. If you are only marking your progress by the distance between you and what you are leaving behind, or if you have no standard by which to mark your progress, then should it be a mystery why you might feel undisciplined or unmotivated?

Further, I’ve worked with enough folks to know that motivations for making certain financial decisions can be just as insufficient as anything else in life. The evidence for this is the simple fact that plenty of folks do not make the choices that they could or should, particularly in the realm of risk management, to help ensure a sounder financial plan. This most certainly means that standards need to be sufficiently motivating to ensure the best financial decisions are made.

In the financial realm, the life you want should be your standard. Achieving the life you want is a simple matter of ensuring that your dollars are devoted to the things that mean the most to you. If you aren’t achieving what you want financially, don’t scold yourself for lacking discipline. Take a closer look at what you think are your problems. If you still lack motivation, be sure you’re looking ahead, for ways to improve.